The sun dumps a boatload (Apparently 174,000,000,000,000 Watts) of energy onto the earth every day. For those of us who live and work in hot, sunny climates, seeing solar panels on homes is becoming more common, but what if we could let our gadgets self-recharge with that same, readily availablee, free energy?

Well Iqua has started to do just this with their latest bluetooth headset- the 603 Sun.

Check their headset out for yourself.

It makes you wonder why so many other things aren’t designed with solar panels integrated into them. Imagine the back of your cell phone constantly giving a little juice back to the battery- especially if we leave it on the window sill on a sunny day, on the dash while you drive, etc.

Need a power cord? Not really.
There’s plenty of solar energy literally just bouncing around with nothing to do.

Now, I doubt we’ll see the day when our 160 WH batteries have solar panels on the back. The reason is that, 160 WH is 160 watts- for an hour. Camcorders don’t pull 160 W so they run for several hours. Similarly, to put the energy back into the battery, a 20 W solar panel would take 8 hours. A 50 W solar panel would take about 3 hours. Currently, a foldable 52 W panel from Brunton will cost you about $880.

A plug-in-the-wall charger will cost a fraction of that- and the charger works inside the studio, inside of the dark places where you normally find cameras that need batteries. But for those gigs that do require rechargeable power in out of the way places, these solar solutions are very nice to have.

I was on a river in Alaska for 10 days shooting with two camcorders. We had 12 NP1 batteries and, back in 1995, the 23 WH batteries were sucked dry by professional camcorders in about an hour. Luckily, we also had two solar chargers that filled them back up in about an hour and a half to two hours.

We developed a system that as soon as something was dead, it went on the solar charger. Because this was a simple and direct panel-to-battery connection, we had to keep our eye on the clock so as to not boil the cells inside the battery with too much sun.

The batteries we used were NiCd batteries- today, seldom used because they are nowhere near as efficient as NiMH or lithium-ion. However, they have one advantage that paid off with the solar charging- NiCD batteries are extremely durable and forgiving to abuse, like overcharging. Don’t try that with Lithium Ion!

Also, by turning the camcorder off when we weren’t actively taping anything, we actually stayed well ahead of our needs- until we had three days of dark, rainy, sleety skies. There was no recharging going on then. :\

Anyway, as solar panels get more effective, maybe we’ll start to see solar panels integrated into other devices that desperately crave power- and that sit out in the sun all the time… oh, I don’t know, maybe something like CARS!?

Wouldn’t it be nice to have your car keep itself cool in the blazing summer heat by harnessing the pounding sun’s energy to create cool air inside the car instead of just letting it create a 200 degree oven? It seems to only make sense when there’s a big movement afoot to make plug-in cars. Instead of wiring an entire corporate parking lot for AC to charge all the cars that are sitting out there in the sun all the live-long day, why not just enable the cars to charge themselves back up with the sunlight that’s already pounding on the car’s panels? 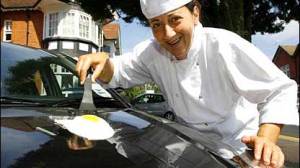