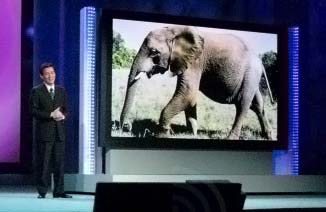 I had opportunity to see Panasonic’s “world’s largest” 103″ plasma screen at the GV Expo… and now I feel like I’d been had. You can’t really claim the 103″ is the “world’s largest” if you, yourself have already tested and are boxing up a 150″ plasma to be shown at CES.

Engadget has a small gallery of photos of the incredibly impressive screen. It could well do with some better anti-glare glass on the front of it…

I’m sure this will make it into the homes of those who really have too much money for their own good. As much as 4k imagery really does need a proper home, I just don’t see a 150″ Plasma as worth the effort to build a room to properly host it, or even to hold it up.

My 110″ front projection screen was mighty enjoyable. It didn’t really need to be any bigger, and I also liked zooming it smaller to watch all the content that is still standard def.

Another nice feature with projection is the lack of a fixed size for the screen.
Because few movies are made 16:9.