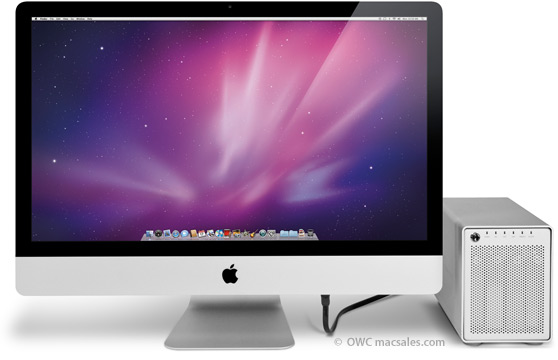 Well, it’s finally happened. And the expert gurus at Other World Computing are the ones that made it happen, again. Giving Mac users the capabilities and features that our PC brethren have been enjoying for years now- eSATA ports.

Apple’s latest computers have Intel Core i3, i5 and i7 processors. Decent graphics power, and beautiful IPS displays, but seriously lack for fast external disk I/O.

Apple has standardized on the obsoleted FireWire 800, but  the rest of the industry has already forgotten about FireWire. They have moved on to eSATA for speeds in the hundreds of MB per second as opposed to FW800’s mere 60 MBps or so. So a Mac user who wanted to use eSATA drives had to have a computer they to which they could add an eSATA card (Mac Pro or 17″ MacBook Pro). But OWC changes that game today. Now, I’ll be honest and point out that OWC’s ability to put in an eSATA port in the latest iMacs is really enabled by the fact that Apple itself has designed the computer to house two drives internally. This gives OWC one port to extend and offer for use outside the computer. So, Apple provided the core functionality, but didn’t see to put the second port on the backplane, where it would be of the most use to the most people.

As pictured, the iMac can connect now to external eSATA RAID cases that offer performance no FireWire drive can match. Moreover, it frees the FireWire buss up for other data I/O like full on Pro Res (HQ)  through Aja’s I/O.

I would love to see a similar hack for the new Mac Mini which has a dual internal drive option.
One can only dream that Apple will enable an ExpressCard 2.0 slot in future iMacs and Mini computers. Wikipedia explains:

Apple doesn’t need to build all kinds of features into their computers. They don’t need to make a big box with ports, jacks and slots I’ll never use. But putting in an expansion slot enables end users to add the extra capabilities they need. A single ExpressCard 2.0 slot would serve any computer well for the next 10 years. Wikipedia notes that “An ExpressCard slot has been commonly included on high-end laptops made since 2006.” It’s time to make this a more uniform port on the iMac, Mini and MacBook product lines.

Current cost is $169, which is a steal for the functionality and speed it gives you. It’s not a Port Multiplier eSATA port because it’s an extension from inside and designed to connect to one drive, but you can connect a big-ass RAID to that, as long as it is formatted to be one volume.