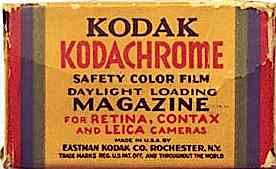 On June 22, Eastman Kodak Company announced that it will retire Kodachrome color film this year, concluding its 74-year run.

This is quite a long time for any single product to be offered by any manufacturer. Kodak says that Kodachrome represents just a fraction of one percent of Kodak’s total sales of still-picture films. That’s pretty darn small and the fact that they’ve held on to it for this long really is a testament to Kodak’s endurance.

The amount of people who have shot film at some point in their life decreases every year. Today’s “young guns” may have never even advanced a frame of film through a camera. I find it a very tactile and cathartic experience and, while it’s still available, I’m going to grab me a roll of film and shoot it this weekend in memory of all the incredible images Kodachrome has provided us for seven decades.

Want more info? Including two videos that highlight what Kodachrome has brought us?
Go to Kodak’s own Kodachrome Tribute page.

My choice of camera will be my completely manual Kodak Retina IIIc.

What will you shoot?