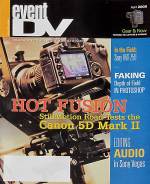 A good friend of mine, and fellow video pro, asked me:

By the way, EventDV is going all paid and digital?
I’m dropping my sub, don’t know about you.

Well, The other mags are considerably thinner. I literally blew through the “NAB” issue of DV in 10 minutes- including reading the editor’s letter and several of the ad pages with products I hadn’t seen before. As ad revenues are down, it’s hard to pay for a gaggle of talented pros to spend hours, or even days testing, reviewing and writing. So articles get shorter, or thinner, or disappear altogether.

Disclosure.
First, I’ve written for EventDV since its inception.
Previously I’ve written for NewMedia magazine, and I’ve also contributed to Camcorder & Computer Video as well as DV magazine. Back in the late 90’s, I published my own entertainment production magazine, Filmadelphia which covered film and video production in the Philadelphia area. Did you want to read M. Night Shyamalan’s production process while he story-boarded, shot and edited Sixth Sense? You had to have read Filmadelphia then.

But writing has never been a venture for profit. I say this both as a writer for EventDV magazine and a video producer. Time spent working on an article is much more profitably spent doing production. I was never able to stop doing production when writing for magazines.

I’ll let you in on a little secret. A $350 gig for 10 hours operating camera is so much easier, and for me, more fun, than three days spent reviewing a product for a magazine, for the same price. But many contributors write because they want to pass along information. We want to help. Because, at one time, we were helped by other pros who had all the answers.

VidPro.
I’m also a member of VidPro-L, an internet listserv that, for those who don’t know, connects hundreds of people around the globe with e-mail through a central server. You join, send an e-mail to the server, and everyone gets a copy. Anyone can reply to the server and everyone gets the reply. Unlike a forum, you don’t go to the information, it comes to you.

When it’s 2 am and you beating your head against the wall with a technical problem, VidPro members have provided answers to me in a matter of minutes over the years. No one gets paid. Everyone stays there for the camaraderie of being in a virtual room with fellow video professionals- some of whom have forgotten more than I’ll ever know. Others are newbies. Some are vocal, some never post, but only read. It’s where I cut my teeth with digital video questions back in 1994, and where I now answer questions today. And, in a room full of people, off-topic discussions are bound to take place. Sometimes we learn from these as well.

I’ll put in a plug for VidPro right here. Anyone can join. Just go to VidProTalk.
I am one of the moderators. Spam is not accepted. Just posting advertisements is not accepted. But answering questions and discussing new technology with your signature offering phone and web site info is welcome. We even welcome manufacturer sales reps who can offer solutions to user’s needs in an informational way. We’ve had Sony and Panasonic reps on the list over time as well.

The printed word.
Now, back to magazines and my friend who won’t pay.

I understand that there are reasons not to pay, but I argue that we already pay far too much for crap we don’t want, or doesn’t help us, or isn’t of good value. Paying $2 a month for a good magazine that, in April, had 30 solid pages of articles, is a  cheap price to pay for a tool that is valuable.

What can we compare it to?

How about a Starbucks coffee: $2.
Valuable: yes.
Critical to getting work done: absolutely.
How long does it last: an hour.
How often paid: almost every day.

Fountain soda at lunch: $2
Valuable: yes. (as long as they don’t screw up the mix)
Critical: no.
How long does it last: 2-refills, 20 minutes.
How often paid: almost every day.

Turnpike tolls: $3.
Valuable: not if you’re still stuck in traffic.
Critical: absolutely.
How long does it last: an hour.
How often paid: twice a day?

Same with bridge tolls. I hate them, but I can’t drive across water yet.

XM satellite radio. $10 a month for music only.
Valuable: eh.
Critical to work: no.
How long does it last: all month.
How often paid: monthly.

TiVo. $12 a month for program info.
Valuable: better than date and time programming.
Critical to work: nope.
How long does it last: all month.
Paid: monthly.

iPhone apps: $1 – $10 depending on ap
Valuable: possibly
Critical to work: maybe
How long does it last: till the next iPhone OS update
Paid: at purchase

EventDV magazine: $1.35 a month
Valuable: definitely
Critical to work: quite possibly
How long does it last: all month (or longer if you save pages)
Paid: yearly

When you consider it to other things we pay without even really considering it, the price of a subscription is not high enough in my opinion. If 30 pages of on-topic content were delivered directly to my mailbox by my local Turnpike commission, it’d be a nice round number like $2, for each time I used it. (heh heh) No. really, that’s how the highways are priced. Even if there’s traffic and the side roads are moving faster than the turnpike, I have to pay my $2 to do 10 MPH on this stupid highway to work, and then $2 to sit in the same damm traffic on the way home.

A magazine never impedes, it only assists. It sits in a case, or folded up in your back pocket till you want to open it up. It requires no power, no batteries to charge. It requires no connection to the internet. No monthly data plan. No WiFi or 3G to get the pictures in a reasonable time. If you drop it, it doesn’t break. You can see the text in direct sunlight. It works perfectly inside a big metal building. It doubles as a shim for the leg of a table, fly swatter… etc.

When you think about it, a magazine is a really inexpensive way to get just the content you want, where you want, when you want. And, for $2, that’s a very nice price for that convenience.

The other question is… EventDV?
Well, if you do video production that mostly involves live events that can’t be stopped– music, theatre, dance, church, wedding, party, etc. Then EventDV is snap-on the money content for you. If you only do EFP, scripted corporate video, independent filmmaking, etc, then EventDV may not be the exact magazine for you, but the gear covered may be of interest to you. No matter if it’s the next independent flick, or church celebration, a review of the new Sennheiser wireless mic is of interest to both producers.

There is no magazine that is completely on target for everyone because everyones’ interests are different. Same with TV channels, radio channels, iPod playlists… Unfortunately, with video magazines (trade pubs) there’s an awful lot of overlap.

Value offered.
The April issue of EventDV (52 pages cover to cover) gives you 30 pages of editorial content. Articles and reviews, business advice, tutorials & tips. All written by writers specifically for EventDV magazine- not syndicated and available elsewhere too.

The April issue of DV (36 pages cover to cover) is geared up for NAB so it features 1 editorial and 8 pages of very short PR blurbs about new and upcoming products from 60 companies. (60 companies ÷ 8 pages = very little space for each one.)

The March issue of Government Video (36 pages cover to cover) has 1 editorial, 3 pages of PR, 12 pages of content.

The January issue of Videography (44 pages cover to cover) has 1 editorial, 19 pages of content, 2 pages of PR – and other PR bits sprinkled throughout the content pages to fill out space.

Videography also has a published issue price of $4.99. So it seems you get a better value for the $1.33 EventDV magazine.  If I weren’t a contributing editor to EventDV, I would certainly subscribe.

In discussing the choice to charge for what used to be a free trade magazine, the thought goes like this:
* a certain percentage never read it, so we save the expense of even sending a magazine to them.
* another percentage read it, but don’t value it. Sadly, we lose them as readers.
+ the last percentage read and value what EventDV offers. Not only are they the best customers to have for the magazine, they are the audience that advertisers want. EventDV becomes more targeted and a better conduit for information to these specific video producers. I’m also happy to be one of those video producers.

So, having just received my latest issue (pictured above) I’ll now happily return to editing a future episode of Healthy Flavors in 1080i60 ProRes 422 (HQ) over SATA on my MacBook Pro.

How did I know this combination could work?

Because I read it in the magazine.

7 thoughts on “Ya get what you pay for.”