I think we’ve all “lost” an image at one point in time. If you haven’t had it happen to you, then you’re not lucky, it’s just hasn’t happened to you yet.

Your still camera has issues, or there’s a bad import session between your computer and your still camera and suddenly, your images are gone. Or one of your kids, or someone playing a joke on you deletes an image you wanted to keep on your camera.

Well, there’s an easy solution…
(how seldom do we really get to hear that!)

MacNN has a nice review of Ecamm Network’s CardRaider, a $20 program that looks at the root structure of your flash media and tells you what it sees:

I tested it, and to my amazement, it immediately found every single photo I thought I might have lost. It also turned up what I think was every photo I’ve taken since August on my 4 GB Secure Digital memory card, despite the fact that I’ve reformatted the card with my Canon PowerShot G7 at least a dozen times.

With a nice simple design, and the ability to do what I’ve only see the photo kiosks at the sore do- scan the entire card for every single image it can find. It doesn’t look at the “table of contents” and leave it at that.

The first time I used one of the Fuji kiosks I was stunned to have the machine find hundreds of images on my recently formatted card. I wished I could do this at home. Well, now you can.

When a digital camera erases photos, it doesn’t actually erase them. Instead, it just forgets where pictures are located on your memory card. As you take new pictures, the old picture data eventually gets covered over with your new photos.

That’s where CardRaider comes in. By carefully combing your memory card, it can find and restore pictures that your camera doesn’t see.

Best of all, the demo version will let you try the program out and show you preview images of what it can recover, so you can make sure it will do the job before forking over a single dollar. Nice. 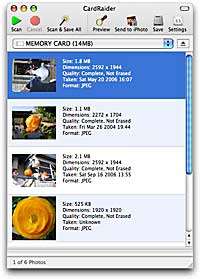 For those of us trying out these new flash-based camcorders that let you delete shots in the camera CardRaider also says that it will recover AVI, MOV and MPEG files too!

For those of us who may capture images that we’d rather not have recovered, CardRaider also enables a secure file erase to make sure that one image never comes back! So that party last night, or those photos of you two that were funny when you took them- and not so funny now, they can be erased for good (and the good of all of us.)

It can also try and recover partially erased images. To try and save that one moment in time before it disappears like tears in the rain.

I wish I had this a couple years back when all the shots I took at the game my best friend and I went to were inexplicably “lost” in the camera, never to be found by the computer.