I went to see Blade Runner – The Final Cut.

First I have to say that the Zeigfield Theatre in NYC is a beautiful place to watch a film.
Even though the preshow was filled with commercials like your local run-of-the-mill multiplex, the theatre itself is a posh, 1000+ seat, single-screen, elegant viewing room. It is up stairs from the street level and the entire ambiance evokes the feeling of stage theater, as opposed to just the silver screen. The only thing it is missing is a curtain to open up in front of the screen before the main performance. (But then, if the screen was covered, there’d be no commercials… but I digress.)

The previews rolled right into the Ladd Company logo, (the green tree) which I immediately recognized. Then a long pause, and the first concussions of the stellar Vangelis soundtrack and the opening titles, white on black.
I looked carefully at the screen and saw that they were rock solid.

No waviness. No jitter. No odd flicker. Perfect… it was made as well as they could make it…

Roll through the text and arrive at the opening images of Los Angeles in 2019 as seen by Roy Batty (Rutger Hauer) and the detail is fantastic.I notice the augmentation of the flame plumes with new effects, and all of the flying spinners have a much greater level of detail and sharpness. In fact everything looks stellar.

I’ve seen Star Wars (1080p24) digitally projected (digital from camera to screen) and it simply paled in comparison to this. It is clear through the numerous extended environmental shots throughout the film that the key focus Ridley Scott had in this Final Cut is to put a greater emphasis on the cluttered and claustrophobic environment that all these (doomed) characters squirrel around in throughout the film.

Almost every shot with a flying spinner is extended. Several scenes on the ground are extended to show you more of the impeccable set design, costuming, props and overall grittiness that came with the futuristic dystopia- a far, far cry from the sterile utopias that many films use to (at least, initially) depict the future.

If only they could see what I’ve seen through their eyes.

The voice over, that I appreciated, would be even more at home in this version to fill in the extended, yet eerily dialog-free sections of the film that seem to call out for greater clarification, or wry commentary. Wired’s recent interview with Ridley Scott about Deckard’s character clarified once and for all that he was always intended to be a replicant, despite the public’s ongoing discussion over that plot point. Given this, it makes sense that Deckard’s “Sam Spade-like” voice over was flat and lacking emotion because, like the android he is, he does lack emotion.

But let me get back to the film itself.

It was a pleasure to see such detail, on such a large scope, with such high quality. I was able to look around the rooms and take in more detail and information that I had ever seen in any of the VHS, LaserDisk or DVD copies I had viewed before. I had even seen a C-Scope 16mm print a few times and this showing of the Final Cut was just in a whole other league.

Taking this comparison back to Star Wars, which was shot in 1080p24 HDTV, I have to speculate that the future is bright for those cameras which capture images above the HDTV specification. HD is fine for a 60-inch screen in a living room or home theatre. It is not fine for a 60-foot screen in front of hundreds of viewers. That is where HD clearly falls short.

Take, for comparison, digital still cameras. How many megapixels did it take before digital stills had a high enough 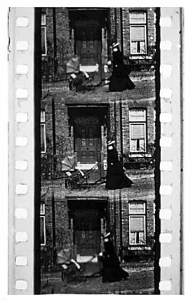 quality to replace film? In the “special event” world, I did not see photographers move to digital until well after the high end cameras were taking 5 megapixel stills. I’d say 7 megapixel stills started to rival 35mm film. Now with 10+ megapixel images, 35mm is dead to event photographers.

You can seethe two film negatives here. The horizontal strip is from a still camera that captures images that are 8 perforations wide. We’ll call this 8-perf. The motion picture film, because it runs the film vertically, uses considerably less film to capture each image. In this example, which is neither anamorphically compressed, nor widescreen, we have a 4-perf image. This means that the 35mm still camera uses about 2x the amount of actual film negative as the motion picture camera does.

Even so, the high end digital filmmaking cameras that take 4k images (around 12 megapixels) are exactly where they need to be to replace motion picture film, and provide as much as, if not more quality and capability than film provides. This way, filmmakers can continue making use of the increased source resolution to perform numerous effects, including cropping within the “negative,” even though it is now digital.

. I’ve read and re-read this book several times and it is a wonderful trip through the movie, and through the challenges of making a movie.

So my thanks go out to Ridley Scott for working on and releasing this 25th anniversary edition of the landmark sci-fi film that is Blade Runner on film. Glorious, uber-high definition film. It is the light that burns twice as bright.
Thanks also to Warner Brothers for not only getting behind the film, and giving it a theatrical release, however abbreviated, (accelerated decreptitude) but also for doing some new marketing for the film as well.

Now, as to the video… I’m still at a loss as to which format to buy: DVD

Which standard do you think will be still spinning disks in Los Angeles 2019?

One thought on “Blade Runner – The Pristine Print”