Take a look at the most beautiful films-
the ones that win best picture, best cinematographer, etc…
how many of them were shot 4:3 or 16:9?
None of them.

Blade Runner: The Final Cut is supposed to open this coming October 5th in NY and LA. It is a remastered film print, not digital projection. But ask yourself, if all the HD camcorders are 16:9, will this mean the end of truly w-i-d-e-s-c-r-e-e-n movies?
The beauty of Cinemascope’s 2.55 or 2.35 to 1 ratio really helps draw us into a film.

Try to imagine Gaff’s spinner flying through the futuristic dystopia that Ridley Scott created if we only had square movies… It would look a lot like this:

Actually, really sucky.
Because the big point of big movies is the e-n-v-i-r-o-n-m-e-n-t the characters exist in.
From 2001 A Space Odyssey to Ben Hur to The Matrix… the environments are one of the major characters in the film. I cannot imagine the chariot scene in Ben Hur in some square frame. Nor can I engross myself in the quiet emptyness of space anywhere near as well without the wide frames of 2001 A Space Odyssey, or Apollo 13. 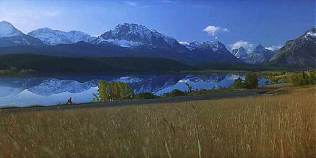 I have yet to find web sites that fondly reminisce about the beauty of 4:3, but I am thoroughly entertained by such websites as the Widescreen Museum. They have numerous resources and online memorabilia about everything widescreen, including a comprehensive page about the various aspect ratios used for motion pictures. Interestingly, 16:9 (= 1.78:1) is larger than 1.37 “Academy” and two other “matted” systems, but smaller than nine other formats. This is probably why any new movie theatre has wide screens with motorized curtains around it. Because there are so many options available to filmmakers- and they choose to use them.

But what of digital filmmaking?
Will people “mask” 1080p24 to create a thinner frame?
Will they throw away precious resolution?

Ah, but if you are shooting 4k, then you have the ability to pick the framing you want from that large image area, even pan and scan within the shot to correct for bad framing, or perform image stabilization on shaky shots without a loss of resolution over a 2k image. Very nice.

But how are these widescreen digital movies going to be shown? Will the 4k projector be masked? Will it interpolate and digitally zoom out to full the 4k projection frame? This could end up being worse of a kludge than anamorphic compression which was standardized at both the gathering lens and the projection lens. With the ability of any auteur to pick any pixel dimensions for their movie, how will we end up viewing such a variety of film framings if there is no standard? Zooming everything to fit is definitely a sub-par solution of interpolation and artifacts.

This is already an issue with some solutions in the consumer world. Optima’s HD-81LV is a 1080p projector with its own anamorphic adapter accessory. And its own manual! “With Optoma’s Anamorphic Lens, the option to create a true cinematic setting is easier than ever. The Optoma BX-AL133 Anamorphic Lens offers true 2.35:1 aspect ratio in genuine movie theater style.”

The trouble is, how many home movies releases are sold, horizontally squished, specifically expecting an anamorphic adapter to be present at the other end? Very few.

The professional industry is already discussing this very problem, with no specific solution in sight. Movie theatres could do this, or that… but nothing is concrete.  Mike Devlin notes specific pixel dimensions for cutting 4k down to various widescreen standards:

But the real question is, why would you buy an HD , or 4k camera, or rent a really good one, only to NOT use all those pixels in the camera?

That was the whole point of anamorphic lenses: to make the most of the resolution available in the film, throwing nothing away. Why spend tens of thousands of dollars on RED’s 12 megapixel camera to only use 7 megapixels for CinemaScope? You should optically squeeze the image, use the whole sensor, and then optically return the image back to normal.

Why are we not continuing to use this important mindset as we move to the digital age?

One thought on “Wither Widescreen? 16:9 is not wide enough!”